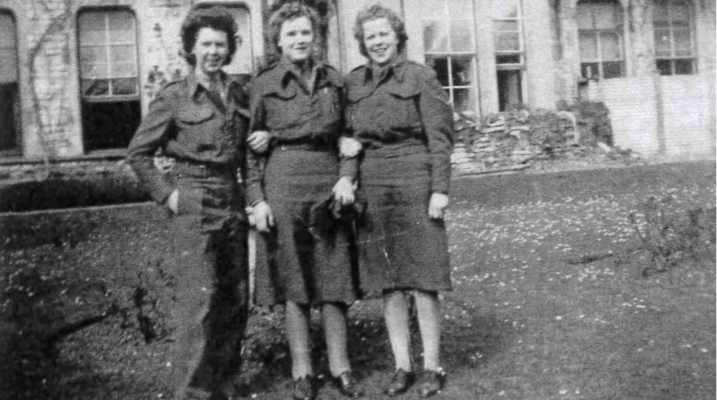 Ghislaine Stovell-Campbell is a 101 year-old former professional ice-skater, ambulance driver and intelligence officer. During World War Two, she served as an officer in the First Aid Nursing Yeomanry (FANY) with the British Red Cross society and then as an MI5 intelligence officer stationed in the Middle East. 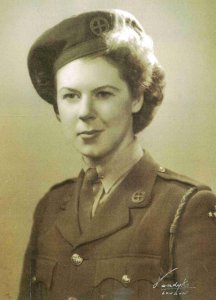 Ghislaine began her service as an ambulance driver in Scotland with the FANY, assisting wounded soldiers from the Polish Army. Her officer there was Diana Tauber, the wife of famous tenor Richard Tauber. She drove ambulances all over Great Britain, from Scotland, to Sherborne, to Moreton Hampstead, to Exeter during the 1942 Blitz and finally to Tiverton – where a hospital was created at a beautiful country estate house there, called Knightshayes.

Ghislaine had served in the FANY for three years when she was injured putting a stretcher into her ambulance. An orderly slammed the door onto her right hand and it practically chopped off a finger. She would’ve lost it were it not for a hospital surgeon nearby, who rushed her to theatre and was able to save the finger.

Consequently, she was invalided out of FANY to recover, but it wasn’t long before she was thinking of how she could assist the war effort next. Before the war, Ghislaine was a professional ice skater under the name of Gillian Grover; she performed in shows and won a number of gold medals as well a British Ice Dance Championship. So, whilst her hand was healing, she became the leading lady in the Blackpool Ice Show to entertain the troops.

After the shows had ended, her hand had healed so Ghislaine began to think about what she could do to better assist her country. Her mother had worked for MI5 during the First World War and had heard they wanted to train someone to do a job in the Middle East. Ghislaine applied and after rigorous testing (including an ‘alcoholic test’ where she drank whiskey and was spun around on a chair – she had plenty of practice being spun around as an ice skater and, after the final spin, stood up, curtseyed and passed the test) she was found to have performed satisfactorily and was selected to be assigned to the embassy in Cairo.

Ghislaine trained alone for six weeks, after which she was deemed ready for her post. It took over three weeks for the boat to go from Liverpool to Port Said as it zigzagged through the Mediterranean minefields. On the boat was a woman with three young children. Noticing that Ghislaine was alone, she asked if she could look after her youngest whilst she took the other two in for lunch – Ghislaine agreed and promptly entered the children’s playpen

At this point, a man who Ghislaine noticed had been watching her for several days approached her and said “I’m going to call you ‘The Brat'”. When she got to Port Said there was no one from the embassy to meet her and, as a 23 year old all alone in Egypt, she was quite lost but the man from the boat said ‘don’t worry brat, I’ll look after you’. He was in fact the head of MI5 at the time. When he had heard of this young girl travelling alone, he ensured that they would be on the same boat so he could personally introduce her to their Egyptian contacts.

Ghislaine worked for three years in Egypt and the Middle East. The job was fascinating but incredibly dangerous. Having signed the Official Secrets Act, not even Ghislaine’s husband knew what she did, which was probably for the best, and still to this day she remains tight-lipped, revealing only that she had some quite narrow escapes and is very lucky to have survived. What we can say is that during her time there, Ghislaine was able to climb the pyramids.

Ghislaine says: “It was such an honour to serve my country; I am always reminded of this by the picture of the Queen I got that went on the wall of my dining room when I became 100. I’m now 101 but I’m still around and I’m very active in my mind.”

How our military grant helped

About a year ago Ghislaine fell at home, badly injuring her shoulder. After receiving initial treatment, her shoulder developed a severe pain. Its condition deteriorated and the pain got so bad, she could no longer sleep at night and had practically lost the use of her left arm. Any attempt at movement became excruciating, which made it incredibly hard to for Ghislaine to maintain the independent life she had always led.

Ghislaine’s GP was concerned by the worsening condition of her shoulder. Fortunately, as he was aware of her service in the war, he referred her to the Military Grants team at King Edward VII’s Hospital who, after receiving Ghislaine’s application, offered her a 100% grant for treatment.

Our consultant Mr Andrew Wallace recommended total shoulder replacement surgery. Ghislaine was desperate for a solution to her pain and immobility and went ahead. The operation took just over an hour, was a complete success and after a short stay at the Hospital, Ghislaine was able to return home with a new sense of freedom.

Ghislaine says: “Thank you very much, it is a great honour to have been awarded such a grant. In spite of all the things I’ve done I’m not terribly well off. I think that King Edward’s is the most wonderful hospital I’ve ever been to.

“As for Andrew Wallace, I think he is more than exceptional. I think he is the nicest guy that anybody could have as a surgeon. He’s done a brilliant job on my shoulder, which feels fantastic, in spite of the fact I’ve got a nine inch piece of steel going down my arm and a steel ball at the top.”

Ghislaine was so grateful to Andrew Wallace and William Harrop-Grittiths, her anaesthist, that she bought them both a rosebush and wrote the accompanying poem, saying “no one’s ever taught me to write poems – it comes quite naturally”:

Well here I am, I’ve come to stay

So plant me please without delay

Dig a hole near a garden wall

I will not disappoint you all

As my leaves start to unfold

The true story will be told

For when the warm sun starts to shine

Then when my leaves start to fall

Cut me to size if I’ve grown to tall

When Christmas comes say a prayer

That I may bloom again next year.