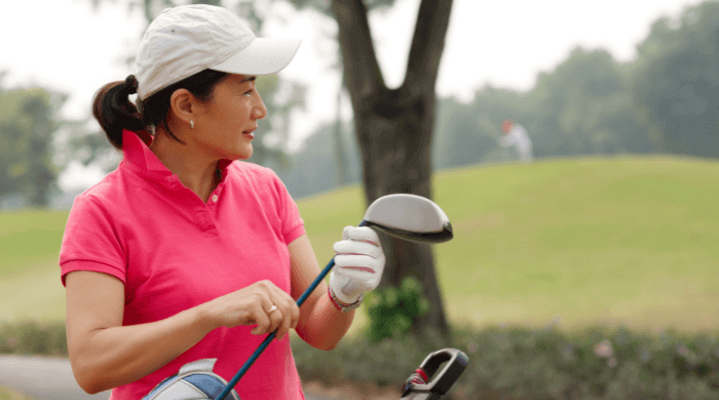 The idea of major knee surgery can put golfers off seeking help for knee pain but using the latest surgical techniques, Professor David Barrett, Consultant Orthopaedic Knee Surgeon at King Edward VII’s Hospital, says players can be back on form in a matter of weeks

Golf might be a low impact sport, but as anyone who takes to the course regularly knows, players are by no means immune to injury. Lower back, wrist, elbow and shoulder pain are commonly reported, but surprisingly, knee injury, more often associated with high impact activities, also ranks in the top five.

A 2017 study found that up to 18% of golfers had sustained a play-related knee injury. The most famous, Tiger Woods, has had multiple procedures on his left knee, including ACL to reconstruct a broken anterior cruciate ligament – an injury usually associated with professional footballers. And, due to hormonal differences which effect the laxity of the ligaments, women athletes have higher rates of knee injury than men. 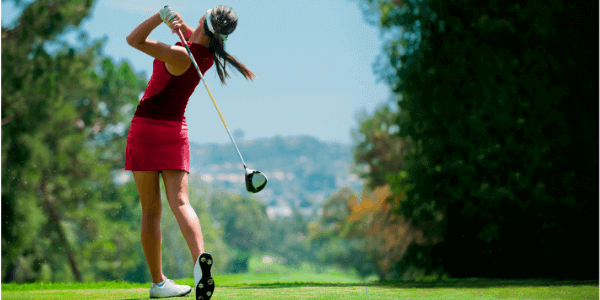 What sort of knee injury can you experience playing golf?

‘Some of the forces we put through our knees when playing golf can be as much as tennis or football,’ says Professor David Barrett. l. ‘It might not be prolonged force, but when we pivot during the drive, we actually put up to five times our body weight through the knee.’

A single, powerful drive can be enough to cause the most common knee injury experienced by golfers – a meniscus tear. This is where one of the menisci, the discs of soft cartilage that act as shock absorbers between the shin and thigh bone, is damaged as the knee is twisted.

The result is pain in the non-dominant knee, often along one side and accompanied by swelling, clicking and sometimes even locking.

However, a meniscus tear is not always the result of direct injury. According to Professor Barrett, it’s more likely to be progressive – the result of that twisting motion being repeated over and over again, over many years.

‘If you’re an enthusiastic golfer, you may find you get discomfort build up in the knee over time,’ he says. ‘Initially, it might just be during play, but as it gets worse, it begins to linger afterwards, perhaps into the next day.’ 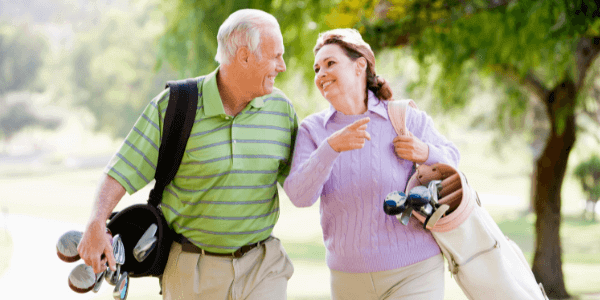 When should you seek help?

Many golfers attempt to soldier on in the hope the pain will resolve itself. For others, the pain will become so severe they feel they have no option but to quit the course.

However, Professor Barrett says both these scenarios are avoidable and recommends players seek specialist advice for any symptoms that last longer than six weeks.

‘If it is a really small meniscal tear, there is a small chance it might settle down. But if the cartilage is torn, it doesn’t have a repair mechanism, so it’s a bit like breaking a tooth,’ he explains. 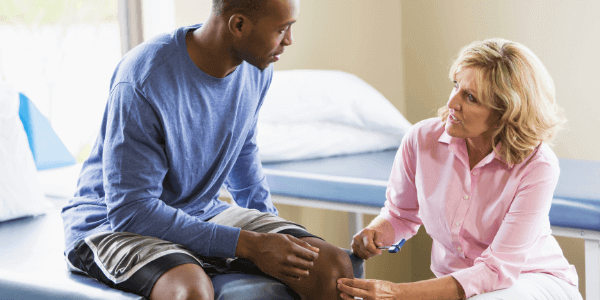 How can meniscal tears be treated?

The good news is that, with early diagnosis, normal pain-free movement can be easily restored. Most meniscal tears can be treated with a quick keyhole procedure or arthroscopy, says Professor Barrett.

A thin tube the size of a biro is inserted into the knee through an incision just four millimetres long. This provides a channel for small surgical instruments which are used to trim and smooth the cartilage tear and wash out the debris. The incision is closed with paper tape, eventually healing to a small white line barely visible to the naked eye.

It takes just 30 minutes to complete the entire procedure under a light anaesthetic similar to that used for tooth extraction. Patients can walk and leave hospital the same day.

‘Recovery is fast’ says Professor Barrett. ‘It would obviously be quicker among professionals, but the average club golfer can realistically expect to be confident about returning to competition within six to eight weeks.’

The best route to recovery, he says, is early action. If not, the cartilage tear can begin to damage the surface of the knee and result in bone-to-bone contact.

In the past, the only option at this point would have been full knee replacement, but recent developments mean there are now alternatives which can prove particularly beneficial for people who want to maintain an active lifestyle.

At King Edward VII’s centre of excellence for orthopaedics, Professor Barratt has been a pioneer of partial knee resurfacing. Much less invasive and with faster recovery times than full knee replacement, this innovative procedure retains as much natural tissue as possible. Only the area that is worn is resurfaced and because no mechanical hinges are used, existing ligaments hold the knee together, allowing natural movement and flexibility to be retained.

Partial knee resurfacing at King Edward VII’s Hospital can usually be carried out as day surgery and Professor Barrett aims to get patients on the practice range an impressive six weeks later, with another six to build up to a full 18-hole game.

‘At around 12 weeks, recovery time is a little longer than arthroscopy, but three times quicker than total knee replacement and, because 85% of the knee is normal, patients report a much better feel,’ he explains. 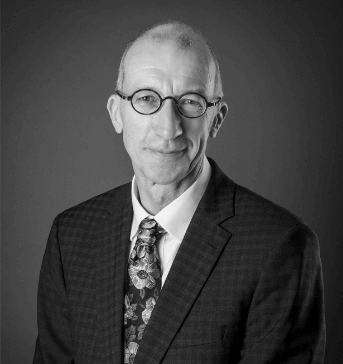 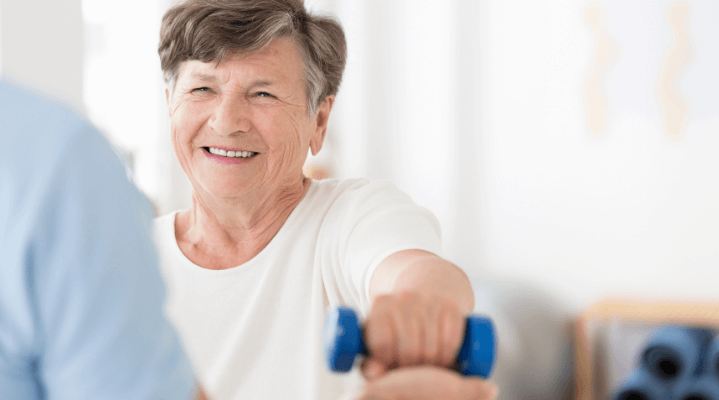 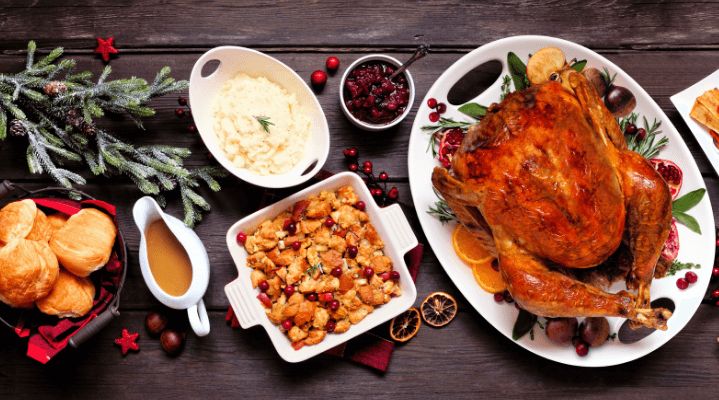 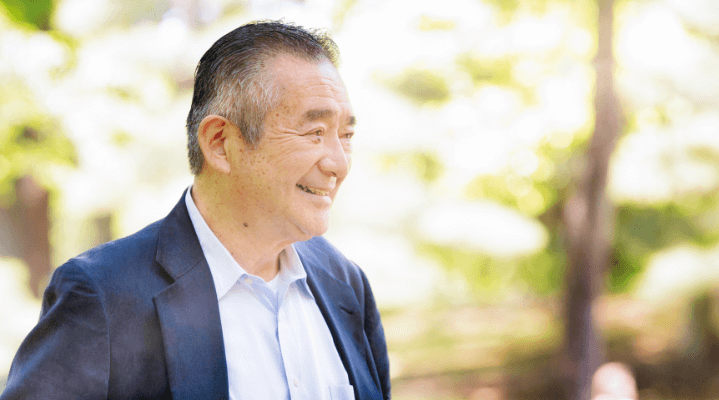